The YNEPF Hall of Fame aims to recognise members who have made a significant contribution to the division, whether through lifting achievements, coaching or other means. 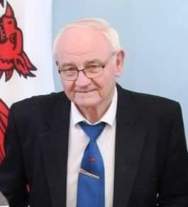 You will surely know of the respect and fondness that all at the Parkhead have for Fred and from a personal view point, the more time I spend with Fred, the more in awe I become.

Twice a Paralympic medallist, his knowledge of training with weights, and the sport of powerlifting goes back some 63-64 years.

If it was possible to hook him to a computer, and download all he knows, the results would be priceless in the world of powerlifting. I am sure he wouldn't mind me saying that he is 79years old as of July this year.

His energy levels, and his passion for the sport leaves everyone in his wake, I am 10-11 years younger than he is but struggle to keep up with him.

Anything that Fred does or plans, is not for his personal kudos or self, it is all for the good of the sport and in particular for the youth within the sport.

The Parkhead was established in 1999 and owes its existence to Fred MacKenzie, his knowledge of funding has seen to that. He is solely responsible for its ongoing success. A multitude of young top class lifters owe their careers in powerlifting to his "commentators eye", his ability to spot the smallest fault in the form of any individual is second to none, and only those who "know it all" would ignore his advice.

I am absolutely delighted that the YNE, has chosen Fred for this honour, there is no one more appropriate. 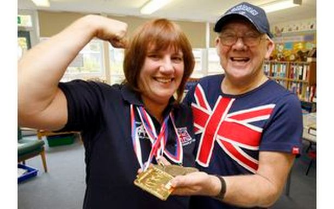 Sue was inducted into the GBPF Hall of Fame last year, something that was well deserved and, although extremely proud of this, she couldn’t understand why the executive committee would want to make a fuss out of her. That’s Sue.

As a proud Yorkshire woman, I know that Sue will be honoured to be recognised in this way by the Yorkshire and North East Division but, whilst being proud, her first feelings will be those of embarrassment. That’s Sue.

Sue is a true champion. She became involved in powerlifting in her late 40s through her daughter Marie, and in that time has won 11 World titles and broken over 80 divisional, British and world records. But, to be a champion in the true sense of the word you need to do much more than win titles.

Sue gives so much to everyone around her. She attends all competitions and will often spend the whole day on the platform loading the bar for other lifters. Even when she competes, her first thought as soon as she finishes is to get back on the platform to help out. That’s Sue.

To sum Sue up, the first time I saw her last week after she had returned from the World Championships having won the gold medal, her first words to me were “I hope you’re okay and work hasn’t been too tough”. That’s Sue.

Sue doesn’t know this but I was asked to lead a whole week of assemblies at the school where I work on the theme of heroes. I based the assemblies on Sue, the primary school teacher and grandmother who also happens to casually break world records in her spare time. 1500 students know all about Sue and her achievements but I haven’t told her this because I know that she’ll be embarrassed. That’s Sue.

I know that, if asked, Sue will cite a number of people for supporting her in her journey in powerlifting. She would say Marie, her daughter, for her constant support. Barrie Nelson, for his belief in her and his guidance and support. Phil Stringer for keeping the Steelman name alive and stepping in when his great friend and mentor Barrie sadly and suddenly passed away, and for the way in which he has built on Barrie’s legacy. But, I know, if she had to name one person who has been, and still is her biggest support, she would say Tony, her husband and best friend who dotes on her and attends every training session and competition.

So, going back to my original point, Sue is a true champion in the very sense of the word. I am extremely proud to call her a training partner, but more importantly a friend and I can’t think of anyone else who better deserves this accolade.

COMPETITION ENTRY
Take a look at our recent news and updates!